An recipe that I didn’t, not being particularly chocolatey inclined, seek out…it appeared in one of my culinary feeds and the concept of a healthy chocolate cake begged further exploration, more so when one of the main ingredients is kumara…

I cannot find the source of the original recipe: all the links in my PDF of the recipe go to Happy and Healthy (one of my main sources of healthy raw materials) so I’m assuming that this a Kiwi recipe from a site not particularly visible to Google…

Rather that try to cut a neat circle with scissors to line the base of the pan, I tried trapping the baking paper between the base and sides of the spring-form pan: perfecto!!!

Place the baked sweet potatoes in your food processor and process until pureed.

Add the rest of the ingredients and process them until well combined.

Pour the mixture into the cake tin and bake for about 30 minutes. Bake slightly longer for a crunchy outer shell.

Let it cool. Once cool, place it in the fridge overnight. 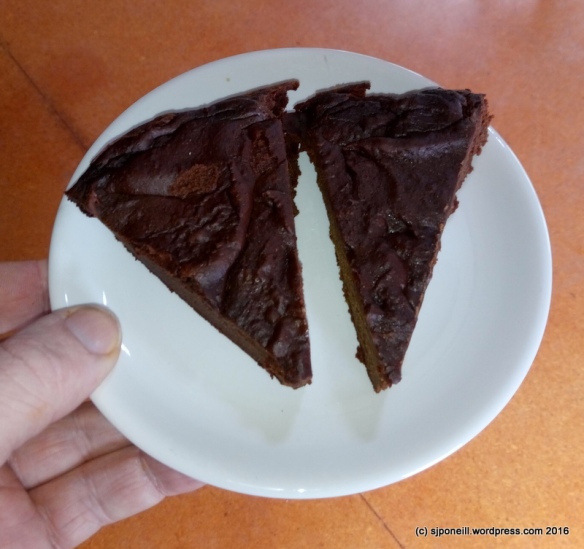 This is the first result made exactly in accordance with the recipe. I used the Lindt chocolate and, once it had cooled overnight in the fridge, had collapsed into quite a firm slice with e very strong chocolate taste. This version did rise during baking but slowly deflated into a more solid slice during its overnight sojourn in the fridge. To be honest, I think it has a better flavour and texture ‘deflated’…

For my second attempt I didn’t change anything in the recipe but used the slice as the centre layer on another variation on the no cheese cheesecake theme. The effect that I was after was a strong contrast between the deep chocolate centre and a tangy orange topping.

The base is the standard mix of dates, coconut oil and meal derived from my nut milk production line. This base had a very strong baked overtone and I think this is from overheating the meal when drying it over the fire – we scraped most of this off and the slice was strong enough to still support the top layer.

The orange topping is a cup of cashews soaked overnight in the the zest and juice of a dozen navel oranges and then pureed in the blender. More zest required next time, I think, as the orange taste was quite distinct but without the tangy effect I sought. 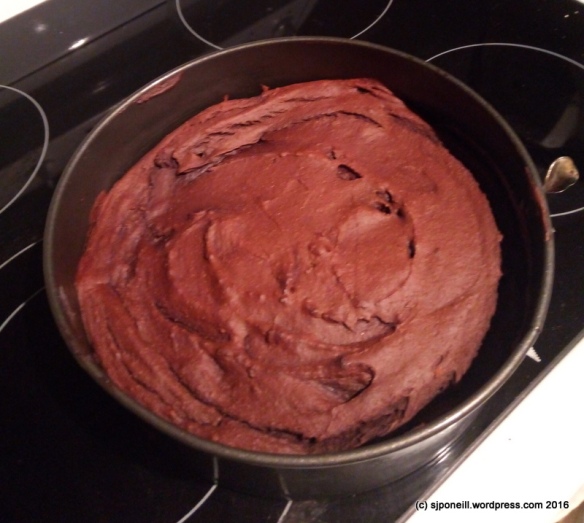 An outcome of discussions on the orange chocolate cheesecake was a curiosity regarding the necessity for the syrup in the recipe. We felt this could be safely replaced with a mashed banana. Version #3 replaced the quarter cup of syrup with a mashed ripe banana and the Lindt chocolate with an equivalent weight of Healtheries sugar-free chocolate baking bits. To compensate for the additional liquid in the banana I added two extra tablespoons of coconut flour.

The result was definitely workable and one small segment survived fire training the following night. An unexpected but not unpleasant result was the embedding of small chunks of unmashed banana – not properly mashed – spread through the slice, delivering a nice banana hit every couple of bites. I don’t think it was necessary to add the extra coconut flour so will skip that next time but keep the banana. The chocolate flavour was not so smooth or strong – but still eminently doable – as with the Lindt but I’m not sure whether that would be due to the change in source chocolate or the drier mix caused by the extra coconut flour. 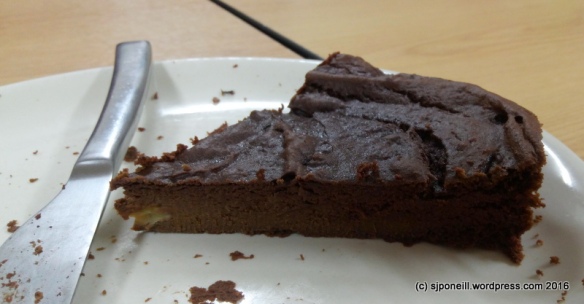 Definitely a winner recipe…very simple to make, albeit with the slight inconvenience of needing an overnight chill in the fridge and with the high kumara content, if nothing else, is at least one way to get the kids to eat their veges…

1 thought on “An oxymoronic treat…”