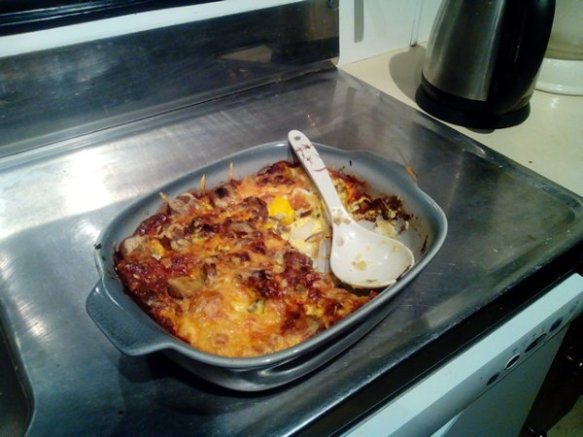 So…take two of the New World sausage frittata…quicker and easier the second time around; didn’t have any basil handy so just used the usuals stand-bys of garlic and parsley which added a different flavour set as did mixing the stated potato with kumara and parsnip. We have a bulk of eggs at the moment – the ‘girls’ are producing five to seven eggs a day – which is maybe the effects of Spring? It seemed like a good idea at the time and I broke three eggs over the top before sprinkling the cheese on…this turned out really well…

So six sausages, nine eggs (only six required), two potato’s, a parsnip and half a kumara later, I have a yummy filling dinner that will keep me going for the next few nights…as I type, I am mentally kicking myself: with the advent of the warmer weather, we already have a decent take of spinach from the stalks that survived the winter. If I’d been thinking, I could have added a few leaves to the frittata or made a simple salad side dish. 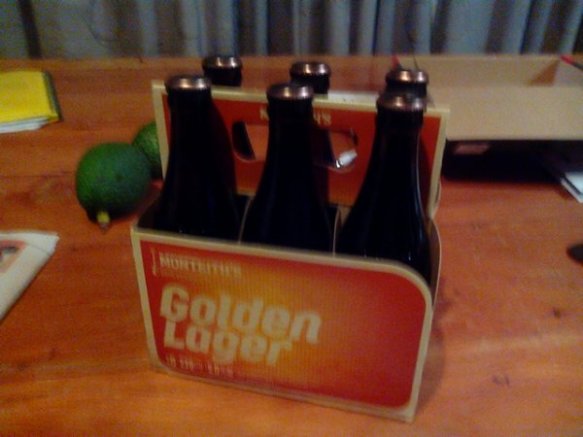 …and washed down with a bottle of this nice Monteiths Golden Lager, courtesy of a recent Monteith’s Breweries give-away….

Slowly getting the hang of tablet-based authoring: while the hardware may be well-integrated, the software isn’t add this is an area that the Android engineers need to spend some serious time distinguishing between the core software and the built-in apps so that the latter can not only be disabled but also removed.