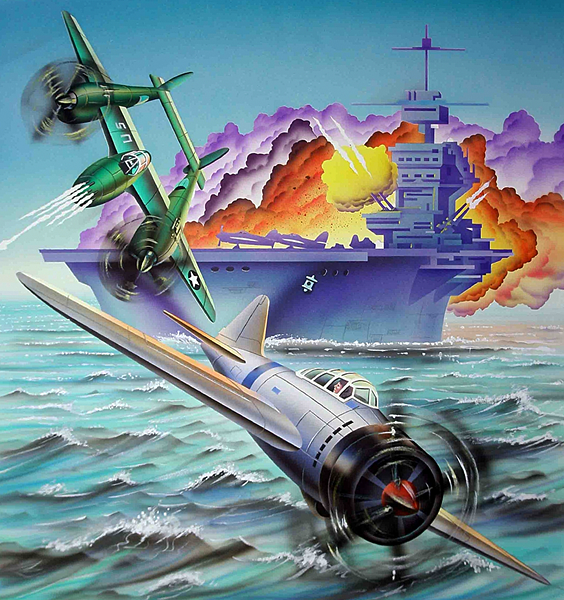 The effectiveness of Japanese naval and land air power came as a surprise to the western powers. In 1941 Japanese aircraft operating in theatre were far superior to those of Britain and the United States. Racism underwrote the devaluation of Japanese technical and military ability. Japanese culture itself by 1944 rejected the idea of serious air attacks on the Japanese homeland. One result was the killing of 100,000 civilians by one conventional air attack alone carried out on Tokyo in March 1945. This seminar attempts to analyse the rise and fall of the Imperial Japanese Air Force.

There was no such thing as an Imperial Japanese Air Force leading up or during WW2. The Navy and Army both had their own totally separate (in R&D, production and operations) air arms that were organised and employed solely as supporting arms to their parent services. This duality is one of a number of key factors that constrained Japanese air power during WW2 from its potential as an element of military power.

To what extent did Japanese air power contribute to their successes?

As above Japanese air power was structured entirely as a supporting arm for its parent service and thus was employed largely at the tactical level. Even the attack on Pearl Harbor was only a supporting operation in support of the Co-prosperity Sphere land grab in late 1941 and early 1942. Had the Pearl Harbor attack not proceeded or had it been unsuccessful, the Japanese were still totally confident (with good reason) in their ability to defeat the US Navy during any Plan Orange engagement.

Even despite the IJN’s investment in naval aviation, the big gun battleship was still the primary striking decisive arm of Japanese naval power. Thus, while the losses at Midway were painful, they were not perceived as a strategic capability loss. This was reinforced by the ability of the Japanese to cover most of their (temporary) empire with land-based air power. The naval aviation could have been employed much more effectively than it was and not frittered away on excursions like that against Commonwealth forces in the Indian Ocean, and the knee-jerk Midway operation. The only time that Japanese naval aviation might have had a truly strategic effect would have been if, having sunk the Lexington, it had stayed in the game and provided top cover to the invasion of New Guinea at Port Moresby.

Over the land environment, the air arm of the Japanese Army was very much like the Luftwaffe in 1939: a well-honed tactical support tool optimised for tactical support to Army operations. Although the Army had experimented with long-range bombers in the 30s, most notably the Ki-20 version of the revolutionary Junkers G.38 flying wing, it did not follow through in this area. Its late war attempts to revitalise long range bombing through the likes of ‘Renzan’ and ‘Shinzan’ were not as advanced as contemporary Western design and were ‘too little, too late’ at a time when the dire need was for superlative day and night fighters.

The ultimate outcome of Japan’s inability to adequately harness air power in WW2 and the period leading up to it was to benefit the Allies in two ways. Firstly, there was the obvious lack of an effective air arm to counter; secondly, Japan’s continued investment in air power diverted resources from other arms and technologies that may have posed a greater risk to Allied operations, in particular, powerful long-range submarines.

In what ways was Japanese technology superior to western technology in 1941 – 1942 and why was it so seriously underestimated?

The primary enabler for Japanese superiority, or perceptions of such superiority as the period of superiority ended at sea in June 1942, and on land in August the same year, are not so much the hardware as the personnel employing it. As I covered off in Seminar 1, a crucial aspect of air power is the people on which it relies. The Japanese in the build-up to and conduct of the land grab are a good example of forces that trained, trained and trained again, and similarly rehearsed, rehearsed and rehearsed again. The net result was that, at the time of Pearl Harbor and the six months immediately following, Japanese soldiers, sailors, airmen and marines were a match for any in the world. The same could be same for their commanders, most definitely at the tactical and operational level but debatably not at the level of strategic command and design.

Apart from bio-warfare which was not employed in WW2 and thus is a moot topic, I do not believe that Japan had technological edge over its competitors, including Germany, at any point before or during WW2. Its ships had no or rudimentary radar but compensated for this with crews much more competent, initially, in night engagements; the Long Lance torpedo was definitely a better weapon than its American contemporaries but this is probably more an indictment of poor American design and quality control; and the legendary Zero fighter, along with other designs, achieved its performance through sacrifices in armour, self-sealing fuel tanks and armament.

During its brief period of operations, the American Volunteer Group, the Flying Tigers of legend, adapted conventional western turning air combat doctrine into a slash and run approach that was highly effective. This tactics were passed onto and employed successfully by US pilots in the Pacific who largely sought to avoid engaging the more nimble but less robust Japanese fighters’ strength opting instead to attack their weaknesses. As the war progressed, Japan’s pool of highly trained and experienced airmen and sailors was whittled away to the point that nimble performance was no longer enough to prevent almost total Allied control of Pacific sea and skies. In the final analysis, Japan fought a ‘come as you are’ war, with an inadequate base for either expansion or sustainment. From an air power perspective, Japan had no Spitfire, Ju-88, Mosquito or B-17 that was capable of on-going development throughout the war.

The West’s failure to fully grasp the level of capability achieved by Japan by 1940, especially in the air is no different than similar ‘failures’ in Europe. However some care must be taken not to believe too fully the popular myth that the West totally under-rated Japan’s capabilities across the board. Certainly, Japan’s Navy was seen as a very credible threat by its potential adversaries. The capability of naval aviation, at the time of Pearl Harbor, had not been proven with successes like Taranto being over-shadowed by losses and ineffectiveness in the Norway and Mediterranean campaigns. Similarly, assessments of the Japanese threat on land were based on contemporary doctrine for conflict in the jungle, for which there had been no real conflict from which to learn. It’s easy to make charges of complacency and incompetence through the lens of hindsight….and let’s also not forget that any superiority, real or perceived, that Japan may have had was fully expended no more than nine months after Pearl Harbor AND that the allies had agreed to make the defeat of Germany their main effort – had they not, it is quite likely that Japan would have been defeated much earlier, most likely through sheer starvation than inaugural use of nuclear weapons.

American firepower did defeat the Kamikaze. Would a modern terrorist employing air power really be immune from attack?

As brutal as the kamikaze attacks were, they were a last desperate act of a defeated warrior caste and never a sustainable tactic. As dramatic as the footage of naval close-in defensive fire is, many kamikaze never got even remotely close to the fleet, especially after the Japanese TTPs were identified and were interdicted by air power not fire power. In addition to reinforced CAPs, allied attacks on Japanese homeland airfields continued as did heavy bomber attacks on Japanese industry and infrastructure. The kamikaze achieved initial success through the element of surprise as did other ‘shock effect’ attacks like the Zeppelin raids on London, Pearl Harbor, the Doolittle Raid and 911. All of these achieved initial or ‘one-off’ success that was unlikely to be repeated or sustained.

With specific regard to terrorist air attack, this is not the forum in which to discuss or even speculate on specific counters to such avenues of attack. That notwithstanding, any international traveller is only too well aware of the international security measures now in effect and which are constantly evolving; and even the media carries regular examples of how well positive air control has been implemented by most, if not all, western nations. All this is to discourage terrorist attack from the air.

Throughout the history of conflict there have been developments in tactics or equipment that have had a surprise effect – some have been unsustainable one-offs, others have changed the nature of conflict in their time. Ten years after 911, with no repeat attacks, one might hypothesise that 911-style attacks fall into the former category. Have said that, who is to know new and unexpected tactic might not be employed with devastating success tomorrow – such is the nature of this profession.

What important conclusions can be drawn from the early successes and later failures of Japanese air power?

Such successes that were, were fairly tactical in nature and not decisive in the conduct of the war. They were all supporting acts to wider naval and land operations. It is true that the successes of Pearl Harbor and the sinking of Repulse and Prince of Wales were repeated but it doesn’t count when this is your enemy doing it back to you. Some conclusions from the Pacific air war that future air aggressors might wish to consider:

To paraphrase c/s Charlie from that great aviation training resource Top Gun, Japan’s use of air power in WW2 is a great example of how not to do it.