Helpless Helplessness: that dull, sick feeling of not being the one at the reins. When did you last feel like that –- and what did you do about it? 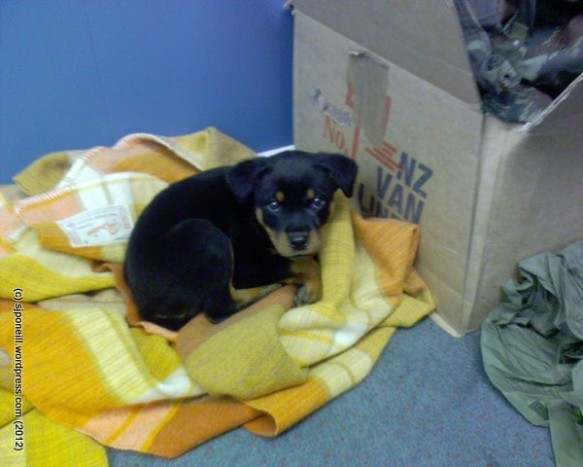 Helpless is when your best mate suddenly comes down sick and you can’t do a damn thing about it.

This is Kirk, my best mate, from when we first met until recently when he became a fan of the new Thunderbirds.

Kirk and his sister had their annual vet check at the beginning of the month and the only slightly unusual thing was their weights were within a kilogram of each other – normally Lulu is mid-40s and Kirk is around mid-50s – this time they were a tad either side of 50kg.

I didn’t think too much of it at the time but a couple of days later, Kirky went right off his food and would only touch offerings with very string scents. Even when we had fish’n’chips – where normally polite Kirk would barge his way in – he showed little interest in either fish or chips…initially, I thought it might have been a reaction to his vaccinations: he’s always been a bit of a sookie…and after a week or so he seemed to perk up.

Then he slipped right back, showing no interest in food and, without any energy, would just sit, too tired to even come up the stairs or walk to the end of the short driveway…we went into the vet yesterday, Kirk and I. He was very brave and let the vet poke and prod him all over and take samples, although I don’t think he’s very impressed with the haircut they gave him so they could scan his tummy.

The prognosis isn’t too good for Kirk: it’s either the big C; another internal growth or rat poison…my best mate who’s been with me for eight and a half years…not much you can do really…just wait for the test results to come back…can’t even slip him a bit of steak because he won’t even look at it…helpless…

Update. Test results came back this afternoon and Option B is looking good at the moment: some form of internal growth that’s causing the internal bleeding that’s making him so weak and lethargic. The vet thinks he is too weak at the moment for any sort of operation to explore further so it’s a waiting game. They gave him some steroids  – which get ground up and mixed in with a teaspoon of Nutrigel – he’s so good well-mannered that he’ll let me, with only a little resistance, smear it inside his mouth so he can’t reject or eject it.

It’s too easy to take false hope from this but only an hour or so after the first dose of steroids, he wolfed down some wet dog food – still not keen or dry food – and is sitting in front for the tellie watching The Professionals with me. The steroids only conceal the symptoms though but the vet hopes this will let him build up enough strength for an operation to confirm what’s going on inside and determine if it’s operable.

So just a waiting game for now, not really anything extra we can do for my best mate…helpless…