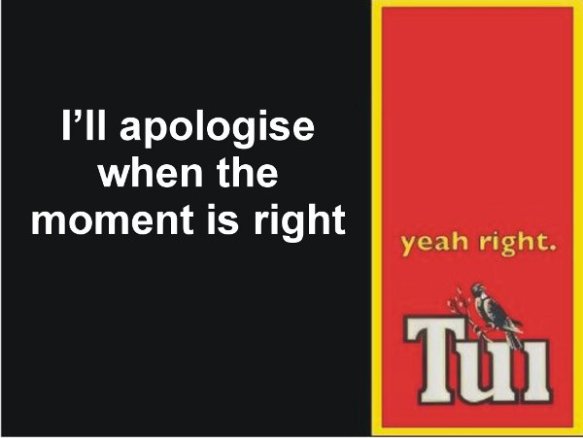 Michael Yon still continues to drag the Bridgegate chain in releasing his Dispatch on the Tarnak Bridge attack and who was ultimately responsible for security on the bridge…on his Facebook page this morning, he said “…General Menard is definitely partially to blame. He’s got nowhere to hide. I’ll do this on my timeline, when the moment is right…”  This is the guy who had false accusations on the air in less than 24 hours after the attack… who then said that BG Hodges accepted full responsibility and that he would be apologising to GEN Menard (who I would suggest is not attempting to hide anywhere)…perhaps Mr Yon could enlighten us, and all those he accused over the Tarnak Bridge attack just when ‘the moment will be right‘ and how he goes about determining that? Surely the best time to apologise is as soon as he realised HIS error(s)…?

No, not really…Cheeseburger Gothic has a thread on the likelihood and likely outcomes of another spat in the South Atlantic between Argentina and the UK…this follows items on The Strategist and Neptunus Lex on the same topic…it seems that the UK is getting a bit squirmy at the thought that the US might not be willing to commit unconditional support for any UK initiatives ‘down south’…funny, that…maybe that’s what happens when you bail and leave your friends holding the baby in places like…aaaahhhh, let’s see…Iraq? I said it there, I’ll say it here…

I posted this on a local blog a week or so ago that took a similar stance. I think that the US (regardless of what you think of the current tenant in the White House) has a right to expect some quid pro quo from its ‘friends and allies’ before supporting them in issues where they have decided to no longer be capable of supporting themselves. I’d dispute the 1 million protesters figure and also note that the UK in Iraq had a backwater AO (compared to the intensity of AOs further north), did nothing but snipe at US conduct of the war especially after the COIN phase kicked off, and had to be rescued by the US in Basra just before scuttling out of the theatre…

– The UK didn’t take a lot of casualties in Iraq…SFA considering they were right up there with the US promoting the cause. They had a backwater AO that the US had to bail they out of just before they ran away back to the UK.

– The UK contribution to Afghanistan is only notable in comparison to the rest of NATO, Australia and NZ. They have scrimped on every pound of support to that campaign (which once again, they talked up in 2001) at the expense of their own soldiers and their allies. They have had to be shamed into providing adequate support to their forces so that they are not a liability to themselves or other coalition partners.

– The UK and NATO were pretty lightweight and ineffective in Yugoslavia until the US bailed them out again in 1995.

– The US worked overtime under the table to ensure that the Brits would win the Falklands War in 82.

– The US had to stand ready to bail the UK and France out of Suez in ‘56 after they made such a botch up of putting Egypt in its place.

– The US had to bail the UK and France out of two world wars and provide the majority of the capability to NATO throughout the Cold War.

In the interests of fairness, I’ll also list those times that the UK has bailed the US out:

Well, that didn’t take long did it…?

So why would the US really give a fat rat’s about Britain’s problems with Argentina, especially since the UK still persists in touting itself as a ‘world’ power…?

If as one comment states on Lex’s item “…Britain is still a “world” power today, once you take American hyperpower out of the equation. She’s one of the very few countries in the world with both the economy and capability to provide “global intervention” military power today…” then Britain won’t really need help from anyone will she…? Certainly not small nations in the South Pacific that had their Argentinian ambassador on a plane home before the Brits could evict their own, that offered ships and troops to free UK forces from other commitments to be deployed ‘South’….

In one of my occasional random strolls through the blogosphere I came across this great article by J. Michael Straczynski (of Babylon 5 et al fame) on the values he (and we can) draws from Superman…I don’t have much access to modern comic books here…Archie and Jughead are the upper limit in rural bookshops around the Mountain…

Random stroll #2 took me to The Village Wise Woman…keeping the grey matter ticking over is a vital part of both individual and organisational learning – if we allow ourselves to fall into a nice safe comfortable rut e.g. like preparing the defence of the Fulda Gap…then we start to become less innovative and effective and our ability and will to question the things about us atrophies…take a slow day and try one or two of the exercises suggested – even better see if you can make one a habit…

Curzon @ Coming Anarchy describes the Dubai postal service (or lack of) and describes how this actually creates a better postal service for people living and working in a major regional hub and international center of finance and commerce.

Great to see The Hurt Locker take out Best Picture – just as good that it wasn’t any of the blockbuster movies that were nominated…I’m listening to various commentaries as I type and it is a concern that many of them see to draw the dots between box office income and best picture…using this methodology, who we ever see any movies that challenge us, make us think or nudge us our of our comfort zones…in a few years who, less the scifi geek community, will really remember Avatar? In thirty years will children today describe a scene from Avatar with the same wonder that many today still describe that opening scene from Star Wars (which also did not win Best Picture in 1978), as the Star Destroyer fills the screen? What phrases from Avatar will be used three decades later by people with no interest at all in science fiction? Great bling ≠ great movie…