Early in 2007, I had to layover in DC between Coalition Warrior Interoperability Demonstration (CWID) planning in Norfolk and a quick visit to the Marine Corps Lessons Learned Centre (MCCLL) in Quantico. Two of us drove up from Norfolk on the Saturday, losing a good chunk of the day in the Potomac Mills shopping complex. We both had separate to-do lists for the Sunday but Udvar-Hazy was at the top of both which sorted that decision.

The facility is out of DC near Dulles Airport but easy enough to find, with or without onboard GPS. There’s a quite reasonable flat-rate for parking which also includes the entry fee for the museum itself – whatever they charge, it is well worth it! The pictures in this album will give you a fair idea of what they have there – there would be more images but I filled the card in the camera and even though the shop in the museum sells wet film, it doesn’t sell spare memory cards. Two and half years later, I had the same problem at Duxford and Cosford – you would think that will digital cameras being the norm now, spare cards would be easy to get at such locations?

I left Udvar-Hazy a very happy plane spotter. Of all the very cool displays they have there my deepest impressions were:

The first Shuttle ‘Enterprise’, a name influenced more by the TV series than the aircraft carriers. Enterprise fills the entranceway to the second display hall. 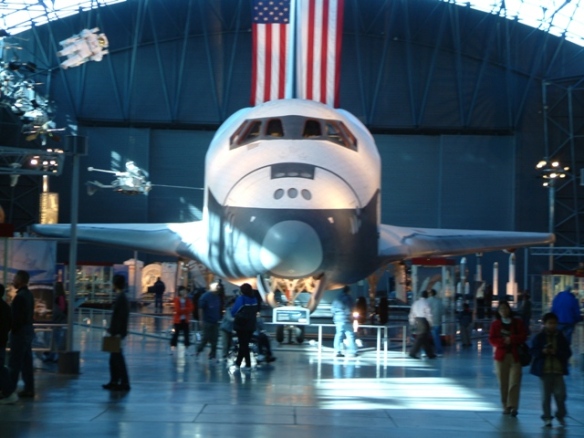 The world’s first jet bomber, the Arado 234…I’d always thought it would ooze power but it is actually quite a petite and delicate looking aircraft, even though it could go like the clappers and its best defence was doing just that!! I remembering being some impressed with Dynamix when they included the 234 in Aces Over Europe in 1994.

The aircraft that DID exude pure power and sheer grunt was the Dornier Do-335 Arrow: big and chunky, with two massive piston-engines; but probably a couple of years too late to really make any difference…even in the same hall as the SR-71 Blackbird, A-6 Intruder, and F-4 Phantom, the Arrow still holds its own as a grunter…

As before, when I get time (and a decent high-speed connection!!) I’ll go through and add captions etc…

1 thought on “A Day at Udvar-Hazy”