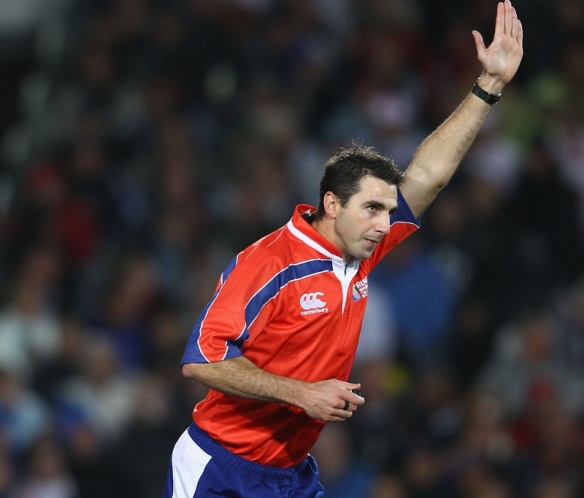 This year experienced rugby referee Craig Joubert was put through the rugby wringer after he awarded a late penalty which enabled Australia to go through to the Rugby World Cup semi finals. Days afterwards the World Rugby organisation claimed Joubert’s decision was incorrect yet World Rugby high performance official manager Joel Jutge believes, “despite this experience Craig has been and remains a world class referee and an important member of our team”. Meanwhile, World Rugby’s CEO Brett Gosper said Joubert’s sprint off the field after the game was “he was keen to get to the bathroom.”

Referees are often the whipping boys as supporters of both teams either criticise or favour decisions they make. And referees’ performances at all levels are critically judged by their own. SANZAR stood down referees following complaints against their rulings.

Concerns about a specified referee’s ability have been around for over a century. The most obvious incident was of a try denied to the 1905 All Blacks centre three-quarter Robert George Deans with Wales leading 3-0. Deans’ try was disallowed by Welsh referee John Dewar Dallas. Despite the All Blacks protests that Deans had been dragged back into the field of play before the suited referee belatedly arrived on the scene. The ruling became part of All Black rugby history.

Many asked why Joubert did not ask for clarity from the TMO. According to protocol this incident was outside the TMO’s area of concern. Since Joubert’s demotion in the quarter finals, some experienced international referees suggested changes.

International referee Mark Lawrence, actually an optometrist, believes that with all today’s technology captains should be given a chance to query contentious decisions as in tennis and cricket, with some limitation on the number of appeals for reviews.

Should we could revert to the days before “real” referees? Prior to a game the two respective captains would meet and set down rules, and would arbitrate throughout the game. Imagine the lively dehydration post-match sessions. Another notion is to maybe microchip referees, or like another international referee Steve Walsh, have a body tattoo – Walsh’s: “He who controls himself controls the game.”

Locally, the late Eddie Lapsley, a pastrycook during the week and a referee over the weekend, was a dedicated Athletic club supporter all his life. During a break in play another Athies supporter asked him how their team on the paddock was going.

Eddie said, “We’re behind at the moment, but I’m doing my best.”