Martin Dransfield also presented at Massey on his return from commanding the New Zealand PRT in Bamiyan Province in Afghanistan in 2010. That was an insightful perspective into aspects of that operation well beyond what has been reported int he media and I am sure that this one will be equally enlightening… 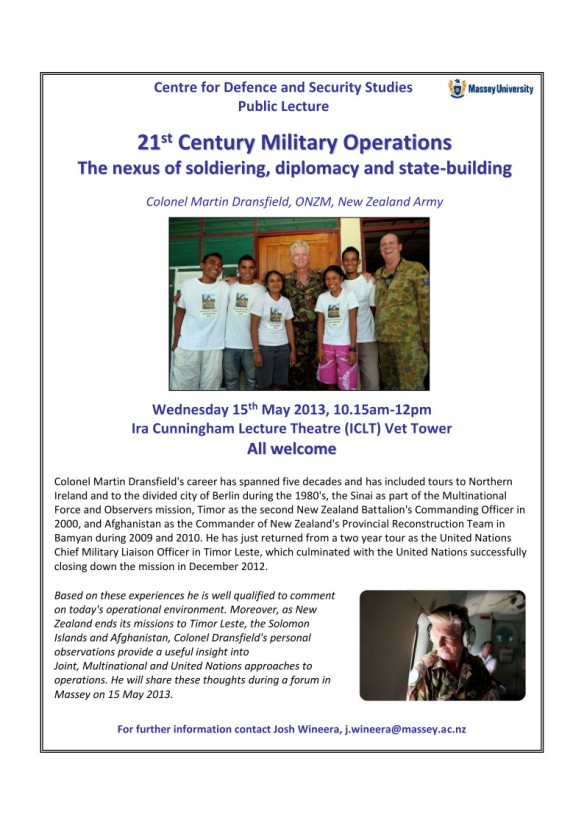 Colonel Martin Dransfield’s career has spanned five decades and has included tours to Northern Ireland and to the divided city of Berlin during the 1980’s, the Sinai as part of the Multinational Force and Observers mission, Timor as the second New Zealand Battalion’s Commanding Officer in 2000, and Afghanistan as the Commander of New Zealand’s Provincial Reconstruction Team in Bamyan during 2009 and 2010. He has just returned from a two year tour as the United Nations Chief Military Liaison Officer in Timor Leste, which culminated with the United Nations successfully closing down the mission in December 2012.

Based on these experiences he is well qualified to comment on today’s operational environment. Moreover, as New Zealand ends its missions to Timor Leste, the Solomon Islands and Afghanistan, Colonel Dransfield’s personal observations provide a useful insight into Joint, Multinational and United Nations approaches to operations. He will share these thoughts during a forum in Massey on 15 May 2013.