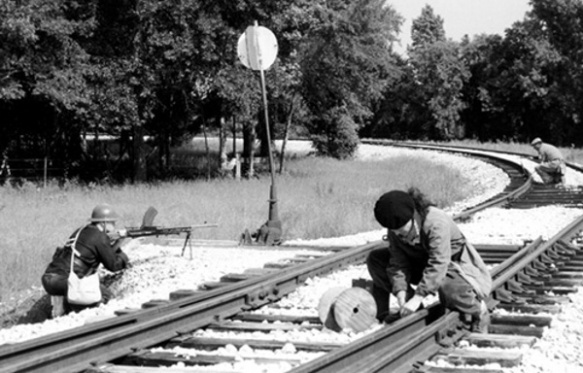 Above: the French Resistance in action – good guys or bad guys may be a matter of perspective…zip forward 60 or 70 years and a Predator’s-eye view of this scene might say bad guys…

16. If “legitimacy” is to be deemed a key component of a successful counterinsurgency, how should that term be defined, what are its components, and how should it be measured?

The focus on legitimacy is nice in theory but like the moral approach to COIN is fraught with risk and has massive potential for the creation of more accidental guerrillas. In general conceptual terms, stability and normalcy would be better objectives in any generic COIN/IW campaign. When examining the C3I of a COIN/IW environment, it may be found that one of the causes was a government’s perhaps ill-advised attempt to inflict its legitimacy upon parts of its country.

Normalcy is not what is normal for the COIN force – it is what is considered normal in the campaign environment. The practical normalcy that Afghanistan might seek now is that of 2003-04, which differs from the normalcy that might have been sought during the Russian occupation i.e. back to pre-1979 Afghanistan. Similarly the normalcy that Iraq now seeks may be similar to that of pre-2003 Iraq where the lights still worked and the water and sewage still flowed, albeit with a strongman in charge. Normalcy and stability for most societies means being able to go to work and sustain one’s family with minimal risk of attack, bombing or intimidation

Depending on the culture, legitimacy can be a many-splendoured thing and certainly not a ‘one size fits all’. Even in the US, there have been and continue to be ongoing dialogues on the varying legitimacies of various levels of government, from municipal through state to federal, in various situations. It’s a big call to include in one’s doctrine concepts that are topics for discussion in one’s own country.

17. Much debate over the focus of FM 3-24 and its application has centered around the terms “population-centric” (focused on securing and controlling a given population or populations), “enemy-centric” (focused on defeating a particular enemy group), and “leader-centric” (the side with certain superior leadership attributes wins).  Given that debate, how should (or even should) these “centric” concepts be addressed in the FM? (Population-centric and enemy-centric are defined by the USG COIN Guide (2009), p. 12, and leader-centric is defined by Mark Moyar, A Question of Command, Chapter 1)

I don’t believe that the debate adds any value. The ultimate aim of any such campaign is stability and a return to (local) normalcy. A robust planning process will identify the key issues and possible centres of gravity in a given environment and develop lines of operations to address and target these. The role of the population may have needed to be promoted in the transitional phases from MCO to IW in Iraq and hence the focus in the current FM 3-24 but in the five years since, awareness of this should be close to universal.

18.a.  Should the FM address any term or conditions analogous to “winning” or “victory?”

No, this leads directly to an inappropriate MCO mindset of ‘defeating the enemy’. This is not to say that there will not be cause to engage and defeat (all going well) an adversary in battle but this should only be a means to a clearly defined end and not an end in its own right.

The term used should be ‘success’.

18.b. If so, how? What metrics can be used to judge success?

Development of campaign metrics for both streams should initially be a product of campaign planning and design, specifically the development of milestones and endstates. Once the campaign begins both the objectives and the supporting metrics must be continuously reviewed.

Metric development (maybe this should be a heading in the -5 series of publications?) should consider both sides of the campaign equation i.e. in addition to measuring progress, or possibly lack thereof, of the campaign, there should also be a set of metrics monitored to determine whether, regardless of the progress or not of the campaign, a force or national exit point is being approached.

Generally, yes, however it leans towards military leadership of a given campaign. Unpalatable as it may be, the optimum lead for long term results may not be a military one, more so if the military do not wish to become entwined as the central element of a campaign and have the freedom to withdraw when its tasks are complete. It may be that, in terms of both political acceptance and overall effectiveness, a campaign may be civil-led. In fact, as contractor/private engagement (the dropped ‘P’ from JIMP) increases, it is not outside the bounds of possibility that a campaign may be privately-led.

National issues aside, the accepted term for the approach broader than all/whole-of-government that encompasses all elements of the JIM(P) model is the comprehensive approach which is accepted in NATO and also independently by the UK, Canada, Australia and New Zealand i.e. four of the ‘Five Eyes’.

A key point that could be laboured in this chapter would be of the absolute need to avoid the situation in Iraq where there were separate military and civil hierarchies and commands…what the dead Germans called ‘unity of command‘….