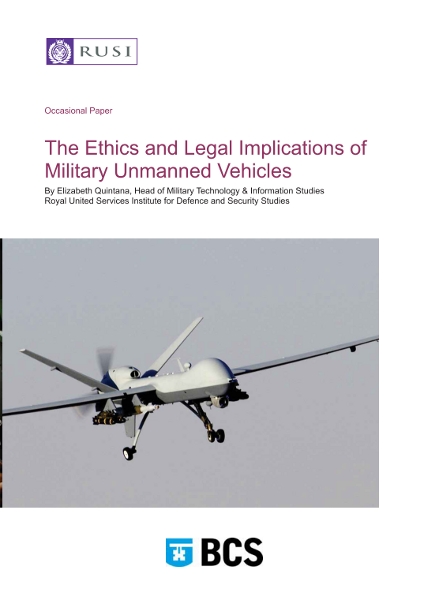 I’ve had to question mark the date as there is no actual date in the document except for a couple of references to the RUSI Ethics and Legal Implications of Military Unmanned Vehicles Conference in February 2008. The RUSI website lists it as 27 January 2008 even though the conference did not occur until February. It’s unsure whether this is just untidy publication or indicative of an aspiration that the document has a more enduring status.

While released under the RUSI umbrella, the document is actually produced by the British Computer Society (BCS) which not recognised as a major influence or actor in either the unmanned vehicle nor the ethics or legal communities.

Although presented as an ‘Occasional Paper’, there are numerous gaps in descriptions of unmanned vehicle development and this  is more a compilation of material presented at the conference and not a consideration of relevant issues across the spectrum of unmanned vehicle development, capability and operation, or encapsulating potential ethics and legal issues other than those presented.  I think that this is slightly dishonest and indicative of the ‘publish or perish’ and ‘quantity over quality’ philosophies that dominate in some of these NGO centres, agencies and institutes.

There is some discussion of unmanned ground and maritime systems in what is probably a timely reminder that there is more to unmanned capabilities than just the high profile aerial system that get 90% of the coverage. This is pertinent as forces consider their approach to unmanned capabilities. Much of the information on unmanned systems is out of date which is probably more indicative of the rate of change and development in unmanned systems than any fault of the document’s authors.

The ethics section is rather generic and speculative and I do doubt just how much engagement those responsible have had with the actual various unmanned vehicle communities especially on the operating front. It’s been my experience that there is considerable and very robust discussion within such communities on these issues. Again, much water has gone under the bridge between Feb 08 and the present day in this area as well and so much of the content is dated.

…at what point do civil airspace rules become overruled in favour of a greater good, especially for HADR operations?

As general rule, civil airspace rules in the western world are risk-adverse and preclude operations of UAS outside of tightly controlled areas of restricted airspace. The track record of UAS involvement in mid-air incidents is very good and even with the higher attrition rate of unmanned versus manned aircraft, UAS still have to even come close to the death and damage rates arising from manned platform incidents.

…the belief that UAV strikes, especially across national borders, are somehow different from the same strikes conducted by manned aircraft.

There appears to be a strong element of Pollyanna-ism, aka ‘she’ll be right –ism’ down-under, that so long as a strike is delivered by a UAV, the accepted rules of international conduct i.e. respecting inconvenient things like national boundaries, international and domestic law, etc, do not apply. How might this apply in the backyard of the South/South West Pacific?

…defining the lines for combatants when key actors are based half a world away outside the mission theatre.

In his January 2000 novel, The Lion’s Game, Nelson De Mille describes an Libyan operation that targets the surviving crews of the F-111s employed in Op ELDORADO CANYON, the 1986 strikes against Libya. A recent C4ISR Journal article raises the issue of whether  US UAS operators conducting ‘remote split operations’ (RSO) from the continental US are subject to the same targeting protocols as pilots (or other military personnel) actually in-theatre. Clearly military personnel in an airbase environment like Kandahar or Bagram are as targetable as personnel conducting operations from Sigonella in Italy against Libya; but what of the US-based MQ-9 pilot driving home to suburbia after a shift conducting strike/CA operations over Afghanistan, Iraq, Libya or Pakistan…? Do such personnel cease to be targetable when they drive off-base…? Would it be unethical or morally wrong for these personnel to be targeted – the West seems pretty comfortable taking the war to where its enemies live…?

Even though this document has a number of flaws and is somewhat out of date, being over three years old, it serves a useful purpose as a ‘firestarter’ for professional discussion on the ethics and rules of not just unmanned vehicle operation but also for the broader complex contemporary operating environment.