In Get Smart, this was funny…

The zone of silence put up by the Kahui and King families around the deaths of the three-month old Kahui twins in 2006 is not.

Debate has raged this week over the proposed publication of a book, Breaking Silence, based on the recollections of the twins’ mother, Macsyna King, and authored by locally well-known conspiracy theorist and wannabe whistle-blower Ian Wishart, described in one contemporary blog item as

He’s probably not that bad but having read a few of his Investigate magazine articles, there is some substance to the description. That notwithstanding, he fronted up and presented very well on RadioLive this afternoon with Willie Jackson (JT opted out due to previous ‘issues’ with Wishart – what a woossy).

At the time of my writing 45,911 people have ‘liked’ it on, although I do note that in the last couple of minutes at least one of my friends who had ‘liked’ it had dropped off the list…common sense starting to break out perhaps? To my mind, that means that there are at least 45, 911 Facebook members who are a guilty as the King/Kahui family of sustaining that wall of silence around the deaths of these children.

Now let’s get some facts down-range…

No one has been convicted of any crime relating to the deaths of the twins. I have no doubt that someone should be convicted not just for the deaths but also for the neglect of the babies prior to their admission to Starship Hospital and for obstructing justice after their deaths.

It is a big step from 45, 911 morons ‘knowing’ that Macsyna King is directly responsible for the deaths of the twins i.e. she ‘did it’, to having the evidence to prove that beyond reasonable doubt in court. Last time I looked, the mob DIDN’t rule in this country…

While it is illegal for anyone in this country to profit directly from their offence e.g. by publishing a book on it (although Steven Anderson managed to get a couple of grand out of North and South for ‘his’ story on why it wasn’t his fault he killed six people in a shooting rampage in 1997 but N&S is hardly Newsweek…), it is not illegal for anyone, especially before any court proceedings are completed, to comment on that issue in any way they please, including blogs and books, especially if they do not promote or incite hate or violence (I note that Facebook doesn’t appear overly concerned about the threats and intimidatory statements and attacks on the Boycott the Macsyna King Book page).

Pressuring book retailers to not stock the book only reinforces the wall of silence obstructing any ongoing Police investigation of the deaths – yes, that’s right you, 45, 911 plonkers, you’re just as bad, if not worse because the height of your moral bandwagons would indicate that you know better, than the original Gang of Twelve family members that cowered behind their right to silence in 2006 and throughout the investigation.

PaperPlus and Warehouse need to grow a set and stock the book on their shelves lest they become as tainted as the Stoopid 45, 911 – this is a topic of national interest that deserved as much coverage from all quarters so that interest does not die like those babies.

The guy who claimed on RadioLive on Wednesday night, Chris-not-his-real-name, to have set up the page, also claims to have set up the Facebook page for the KFC DoubleDown burger (a work of art in my opinion – the burger not the FB page) that saw national stock of the DoubleDown burger run out in less than two days. This means that he is a. a spin doctor and/or b. a meddling dickhead who has no personal stake in this debate i.e he’s just doing it for shits and giggles. That he lacks the mortal courage to front up under his own name is a fairly good combat indicator to his own personality.

A lady rang RadioLive this afternoon and challenged all the 45, 911 pitchfork and torch crew to donate a small amount to Women’s Refuge or a similar organisation that stands against family violence – if they feel so strongly on this issue. Hey, guess, what? None of those organisations will see the slightest spike in their donations this month.

I don’t buy into or support Macsyna King’s lifestyle up to and possibly past the death of the twins – Ian Wishart says that she has now turned herself around – she has exactly the same right as anyone else in this country to state her case in any legal media she chooses to. She even has the same right to earn money stating her case if people are prepared to part with it. She has not been convicted of any crime, regardless of the 45, 911 loony-toons who just ‘know’that she is guilty – and who would be the first to bleat if their own civil liberties were attacked in this manner.

John Tamihere is playing fast and loose with the law when he incites people to buy a copy of the book, scan it and distribute it online…dumb-arse, going into detail on exactly how people should not do this is incitement…what a hypocrite as he bleated on yesterday about how Ian Wishart had employed equally dubious (but not illegal) journalistic tricks to secure an interview with him (“...but it was off the record...”) – can I call you a dumb-arse twice in the same paragraph?).

Will I buy the book? Probably not, I have no doubt that it will be sold somewhere because there is money involved but it’s not really the sort of book I buy and I’m also kinda ‘off’ buying books at the moment because a. I have such a massive backlog of stuff to read, b. Scale Model Expo is at the end of August and I need to focus, and c. I’m attracted to this EPUB format once local retailers stopping screwing us by selling e-books for the same price (but considerably reduced overheads) and normal hard copy books.

Will I read it if I come across a copy? Certainly I’ll have a browse and see where I go from there…

And a final parting shot to the 45, 911 – you all strike me as the sorts that need to be told things more than once before they sink – if this crime remains unsolved, you need to stand up and accept some responsibility for that…you are nothing more than the sad flotsam of the information age, what Paul Henry described on Tuesday afternoon (yes, he’s back!!) as “…those who are so desperate to be outraged…” 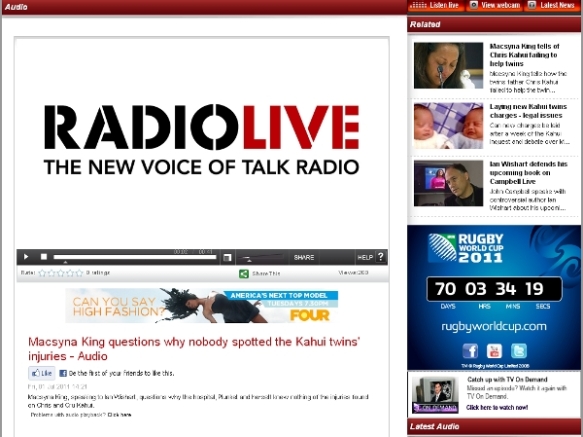