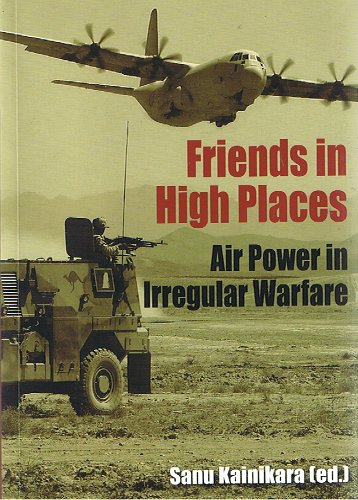 The cover raised such expectations

My initial visual impression of this book was “Yes! the Aussies have ‘got it’!”: the cover very positively shows a C-130 at low level over a Bushmaster Infantry Mobility Vehicle and not the F/A-18 and M-1/ASLAV combination that might be indicative of a conventionally focused publication. Unfortunately this warm buzz did not last beyond the second page of the foreword which notes the ‘…predilection towards precision strike…‘ in the collected papers as ‘…one of our key asymmetric capabilities against a typically asymmetric foe…(1)’

These comments set the scene for the remainder of the book. While various CIA(2) truisms appear through the papers, they are not supported by the text which largely drives towards supporting the maintenance and further development of current air power capabilities with continuing focus upon kinetic operations. Although it makes a case of a balanced spread of air power capabilities, the truth today is that only a very small number of nations can actually do this – the rest of us have to make some tough decisions about what capabilities we need to maintain nationally and what we may have to give up to do so.

Friends In High Places does not consider the lessons of allies and partners in coalition operations since WW2. Its conclusions focus on what was i.e. offensive kinetic air power and not upon what is and will be: a blended mission-specific capability mix drawn from national and coalition military, government and civilian sources – to use an obsolescent but appropriate term: Joint, Inter-agency, Multi-national and Public (JIMP)(3).

This publication has been written around a pre-assumed conclusion: that traditional kinetic air power will remain as the premier ADF air power output. While this may or may not be the case, by approaching this publication with that belief as a given, all the content is badly skewed from the reality of the COE. A more effective approach would have been to consider the COE and what makes it different from  the more comfortable traditional forms of warfare and then apply these findings to the employment of air power. Applying an open mind to the complexities and nuances of the COE may have produced a volume that lives up to the promise of its cover.

Although the foreword notes the minimal consideration of air power in contemporary COIN doctrine like FM 3-24 and LWD 3-0-1, there does not seem to have been any attempt to engage the COIN/CIA(2) community of interest (COI) in Australia or offshore. This is doubly disappointing as agencies like Force Development Group in Puckapunyal, the NZ Army’s Interbella Group, or the COIN Center at Ft Leavenworth could have added considerable value to relevant aspects of this book without detracting from its air-centric theme. As a result, both the land and CIA aspects of this book are very weak. Similar comment can be made regarding the Special Operations and Urban Operations chapters.

The editorial staff has not included any discussion of maritime considerations, from general or air-specific perspectives which is a significant omission for a nation surrounded by water, which is reliant upon the sea ways for trade and industry, and whose major military operations are far more likely to be expeditionary than domestic.

In considering how air power can best operate in a CIA environment, there has also been no mention of the aviation branches of either the Australian Army or RAN apart from a couple of inaccurate paragraphs on ARH (the Eurocopter Tiger Attack Recon Helicopter adopted by the Australian Army). There is also no mention of integration with other government or civilian air assets or those of likely operational partners like New Zealand or Singapore; nor any acknowledgement of the vital role of all sources fusion when discussing aspects of ISR.

The papers included in this collection do not have a good nor consistent grasp of the irregular environment and thus any conclusions they may draw are developed on a somewhat shaky foundation. By the time that the original portions of this book were drafted i.e. those that are not rehashed staff papers, vast quantities of analysis, comment and intellectual horsepower had been expended on defining the COE. Had these resources been tapped, Friends in High Places would be a must-read. As it stands at the moment, its most effective message is the cover photo.

(3) I think that I may have inadvertently helped kill off this term a few years back when I made a number of public comments along the lines of ‘Bring out the JIMP‘ from Pulp Fiction.