NZ troops in Kabul - the soldier on the left is correctly dressed in issue Special Operations sunglasses.

The NZ news media has covered itself in glory again – NOT! When will they learn that sensationalism and short-term rating gains actually have real effects on peoples lives. I refer of course to the NZ Herald’s publication of images showing NZSAS VC winner, Willy Apiata, on the job in Kabul in the aftermath of the Taliban attacks on Monday. Because you can, because Cpl Apiata is already newsworthy, or because someone else will do it anyway are not adequate reasons – they are weak excuses.  The images in question portray a soldier nothing like the clean-shaven well-groomed soldier portrayed in the media at the time of his VC investiture. Even the fact that he is in-country is not for the NZ Herald or any other national media to trumpet to the world. It’s my understanding that the NZDF goes to great lengths to educate media agencies – with considerable success – on what the Defence Force does and, perhaps more importantly, WHY it does some things so the Herald doesn’t even have a defense of ignorance. This is media ignorance and corporate arrogance at its worst. If the Herald had any product worth boycotting, I’d boycott it but will have to satisfy myself with flicking them the finger.

It is significant however that  the NZSAS have been noted as key players in repelling the Taliban attacks in Kabul and I think this goes a long way to getting New Zealand some serious street cred (outside to Spec Ops community) as for-real contributors in Afghanistan. Although NZ has deployed Special forces to Afghanistan for a umber of tours, their activities are, for good reason, kept behind an opsec shield. The first real inkling that the New Zealand public had of the level and intensity of their activities in Afghanistan was when Willy Apiata’s VC citation was released in 2007. This street cred is possibly even more important due to recent proposals to draw down the number of troops in the Provincial Reconstruction Team (PRT) in Bamiyan province

The Government is working on an exit plan to pull all New Zealand troops out of Afghanistan.

Dr Mapp visited the Provincial Reconstruction Team in Bamiyan, and said he believed New Zealand had made the right decision in drawing down its troops. He said the province was making good progress.

“The PRT will soon begin its transition towards an increased civilian component, in line with the Cabinet decision of 10 August. It is clear that Bamiyan is ready for the next stage of economic development.“

Is the attack in Kabul a ripple effect of the surge – a sign of the Taliban adopting Whac-a-mole tactics as a counter-measure against the surge in the south of Afghanistan i.e. of popping up and dropping back into their holes before ISAF can reconfigure? Is this attack  taking the war to where the surge isn’t… 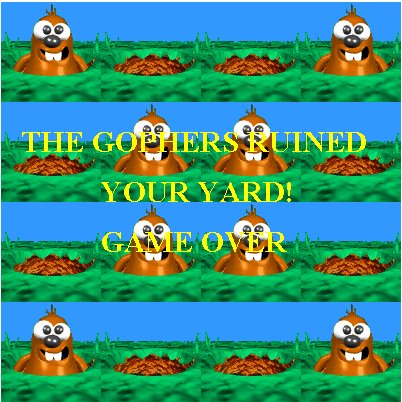 Hit a Gopher. Click the green 'Start' button at the bottom right, then get ready to whack the gophers by clicking on them when they stick their heads out of their holes. Miss 5 gophers, and the game is over!

Hit a Gopher is the equally addictive and frustrating online version of Whac-A-Mole. “If the player does not strike a mole within a certain time or with enough force, it will eventually sink back into its hole with no score. Although gameplay starts out slow enough for most people to hit all of the moles that rise, it gradually increases in speed, with each mole spending less time above the hole and with more moles outside of their holes at the same time. After a designated time limit, the game ends, regardless of the skill of the player. The final score is based upon the number of moles that the player struck.”

You try and you try and you try…but nutjobs exist on all sides – you really have to wonder what sort of fundamentalist takfir arrogance exists in Trijicon management to so arrogantly and blatantly cast marking with clear Christian connotations on each and every one of their products – does some guy in their PR department also moonlight as a cartoonist for the Danes?? How would we take it if every barrel of crude (yes, I know it doesn’t really come in barrels) we imported from the Gulf was tagged ‘Death to the Great Satan and all his friends‘? Of course, no one, including NZ, is going to withdraw their ACOG sights despite demands from other nutjobs that this occur – one almost wonders if Trijicon is batting for the other side as home goals like this are too good to be accidents…

2 Peter 1:19 — “And so we have the prophetic word confirmed, which you do well to heed as a light that shines in a dark place, until the day dawns and the morning star rises in your hearts."

John 8:12 — “When Jesus spoke again to the people, he said, ‘I am the light of the world. Whoever follows me will never walk in darkness, but will have the light of life.’”

Paper Replika has just released the Kriss Super V – no subtle divisive inscriptions on this baby although who would blame them if they did…?