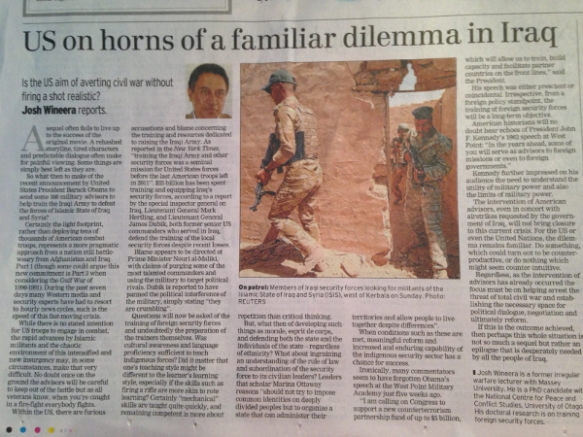 A sequel often fails to live up to the success of the original movie. A rehashed storyline, tired characters and predictable dialogue often make for painful viewing. Some things are simply best left as they are.

So what then to make of the recent announcement by U.S. President Barak Obama to send some 300 military advisors to help train the Iraqi Army to defeat the forces of Islamic State of Iraq and Syria? Certainly the light footprint, rather than deploying tens of thousands of American combat troops, represents a more pragmatic approach from a nation still battle-weary from Afghanistan and Iraq Part 1 (though some could argue this new commitment is Part 3 when considering the Gulf War of 1990-1991). During the past seven days many western media and security experts have had to resort to hourly news cycles, such is the speed of this fast-moving crisis.

While there is no stated intention for U.S. troops to engage in combat, the rapid advances by Islamic militants and the chaotic environment of this intensified and new insurgency may, in some circumstances, make that very difficult. No doubt once on the ground the advisors will be careful to keep out of the battle but as all veterans know, when you’re caught in a fire-fight everybody fights.

Within the United States, there are furious accusations and blame concerning the training and resources dedicated to raising the Iraqi Army. As reported in the New York Times, “training the Iraqi Army and other security forces was a seminal mission for United States forces before the last American troops left in 2011”. $25 billion has been spent training and equipping Iraq’s security forces, according to a report by the special inspector general on Iraq.

Lieutenant General Mark Hertling and Lieutenant General James Dubik, both former senior U.S. commanders who served in Iraq, defend the training of the local security forces despite the recent losses. Blame appears to be directed at Prime Minister Nouri al-Maliki’s, with claims of purging some of the most talented commanders and using the military to target political rivals. Dubik is reported to have panned the political interference of the military, simply stating “they are crumbling”.

Questions will now be asked of the training of foreign security forces and undoubtedly the preparation of the trainers themselves. Was cultural awareness and language proficiency sufficient to teach indigenous forces? Did it matter that ones teaching style might be different to the learners learning style, especially if the skills such as firing a rifle are more akin to rote learning? Certainly ‘mechanical’ skills are taught quite quickly, and remaining competent is more about repetition than critical thinking.

But, what then of developing such things as morale, esprit de corps, and defending both the state and the individuals of the state – regardless of ethnicity? What about ingraining an understanding of the rule of law and subordination of the security force to its civilian leaders? Leaders, that scholar Marina Ottaway reasons “should not try to impose common identities on deeply divided peoples but to organise a state that can administer their territories and allow people to live together despite differences”.When conditions such as these are met, meaningful reform and increased and enduring capability of the indigenous security sector has a chance for success.

Ironically, many commentators seem to have forgotten Obama’s speech at the West Point Military Academy just five weeks ago. “I am calling on Congress to support a new counterterrorism partnership fund of up to $5 billion, which will allow us to train, build capacity and facilitate partner countries on the front lines”, said the President. His speech was either prescient or coincidental. Irrespective, from a foreign policy standpoint, the training of foreign security forces will be a long-term objective. American historians will no doubt hear echoes of President John F. Kennedy’s 1962 speech at West Point, “In the years ahead, some of you will serve as advisors to foreign missions or even to foreign governments”. Kennedy further impressed on his audience the need to understand the utility of military power and also the limits of military power.

The intervention of American advisors, even in concert with airstrikes requested by the government of Iraq, will not bring closure to this current crisis. For the U.S. or even the U.N. the dilemma remains familiar. Do something, which could turn out to be counter-productive, or do nothing which might seem counter intuitive. Regardless, as the intervention of advisors has already occurred the focus must be on helping arrest the threat of total civil war and establishing the necessary space for political dialogue, negotiation and ultimately reform.

If this is the outcome achieved, then perhaps this whole situation is not so much a sequel but rather an epilogue that is desperately needed by all the people of Iraq.

Josh Wineera is a former irregular warfare lecturer with Massey University. He is a PhD candidate with the National Centre for Peace and Conflict Studies, University of Otago. His doctoral research is on training foreign security forces.